In event that absolutely does not have any connection to any competitor platforms, Prologue For A Vacant Kingdom is receiving an update with some new content today! How good is that?! I'll highlight the changes below!

A brand new boss has moved into Spectral Suites. She's a little bit hidden, and actually getting to fight her involves a small side-quest of sorts. I won't say much more than that so as not to spoil anything. I hope you'll all have fun tracking her down and fighting her!

Technically speaking, I'm very proud of her. In particular, she comes with a new dynamic music system where the music builds up and becomes more dramatic as you get further and further into the battle. It's a touch subtle, but I think it'll make things seem more intense when you're at her last phase, with 1 HP and just barely managing to hang in as you work away at her last sliver of health. 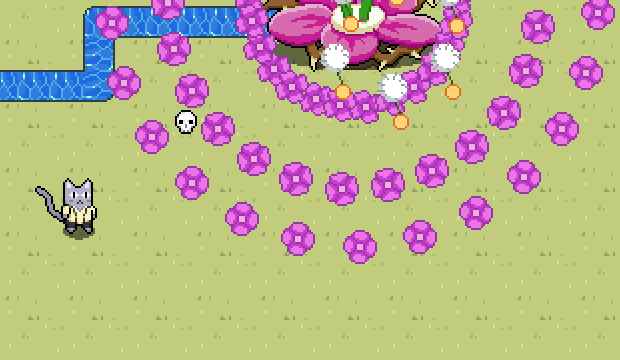 You "learned the ropes" of Easy Mode. You conquered Intended Experience. Are you ready to take things to the next level on the new hardest difficulty setting: Masochist Mode?! Statistically speaking, probably not... but that won't stop me from telling you all about it!

I don't expect Masochist will be for everyone, but it'll provide a truly challenging gaming experience for the Core Gamer Demographic. This is for those of you who love to brag about your herculean gaming feats like: attaining a 6 figure GamerScore®, defeating The Bed of Chaos, or reaching 99 in Mining and Runecraft.

One thing that I've taken a look at is performance, and I think I've made things run a good deal better. I think that Easy and Intended Experience (Medium) should be a smooth ride through and through for anyone on relatively modern hardware. It's still not 100% at where I'd like it to be though, in particular, Mandrake (the 1st boss) can get choppy on a couple of its phases on Masochist.

Some bullet sprites have been modernized too, in case it bothered you before that some of the bullets were just single-color circles before. Now with 50% more epilepsy triggers!

Also, you can now keep firing while lunging/dashing. Pretty insignificant, but it feels better to me.

And of course, some new "jokes" and some good, old-fashioned bug fixes have been peppered in as well!

Thanks for reading (and playing?!),
shru.

A hybrid of bullet hell and action-RPG.

thank you, now i can review the gam